Catarina Alves Costa is a director and anthropologist. Among other films, she directed Margot (2022), Viagem aos Makonde (2020) Pedra e Cal (2016) Falamos de António Campos (2010) Nacional 206 (2009) O Arquiteto e a Cidade Velha (2004) Mais Alma (2000), Swagatam (1998) Senhora Aparecida (1994) and recently co-directed Um Ramadão em Lisboa (2019). Graduated in Social Anthropology, she received a Master’s degree from the Granada Centre for Visual Anthropology at the University of Manchester, as a fellow of the Calouste Gulbenkian Foundation and a PhD from Nova University of Lisbon with the thesis Camponeses do Cinema. Representations of Popular Culture in Cinema Portuguese. In 2000 she founded with Catarina Mourão the producer Laranja Azul where she produced films by Daniel Blaufuks, Sílvia Firmino and João Ribeiro, among others. She is an Assistant Professor at Nova University of Lisbon and Coordinator of the Master’s degree in Anthropology – Visual Cultures and the Audiovisual Laboratory, FCSH Pole of the Center in Network in Anthropology / CRIA. She organized for the Portuguese Cinematheque in Lisbon / Cinema Museum the Ethnographic Archives of Margot Dias filmed in Mozambique and Angola between 1958 and 1961. She also teaches at the University of São Paulo, in Brazil, and at the Faculty of Social Sciences of the University of Barcelona. She received among others the Best Documentary Award of the Recife Ethnographic Film Festival (2019), the Critics Award from Caminhos do Cinema Português (2009), the Planéte Award at the Bilan du Film Ethnographique (1999), the Society for Visual Anthropology American Anthropological Association Film Festival Excellence Award, USA and the 1st Prize of the FESTIVAL VII Rassegna Internazionale di Documentari Etnografici (1996).

This Masterclass makes a foray into ethnographic film and documentary, opening perspectives for its realization and discussing practical and theoretical themes: cinematic styles, language and ethics. From the viewing and analysis of film excerpts I will talk about my way as a director. First, the confrontation with the terrain and the way I thought about the projects in the first films I made: Return to Earth (1992) and Senhora Aparecida (1994). The idea is to get a little into the discussions about language options, ethics and technique. It is also important to mention the work of research and documentation, the need to leave the world that is known. I will also talk about the shooting, between improvisation and staging, especially in the work of performing visual ethnography in museological and anthropological research projects with discussion of excerpts from A Seda é um Mistério (2001) and Casas para o Povo (2010). It will also be addressed the construction of dramaturgy and local narratives, ambiguity and conflict especially in the film O Arquitecto e a Cidade Velha (2004). Finally, poetics and authorship, launching a debate about the idea of an intimacy that can only be achieved with a certain ethnographic imagination...

This film shows the daily life in a small village of Minho, in the North of Portugal, during one summer. With the arrival of the emigrants, the belonging to the land and the traditions linked to the rural world is reinvented. A poetic film about a certain nostalgia of a world coming to an end. 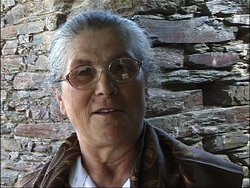 A film made for the Castelo Branco Museum, about the handmade process of making the seed. At the beginning of the film, Teresa Frade climbs to the only mulberry tree of Rua da Amoreirinha, in the city of Castelo Branco, looking for food for her silk animals.... 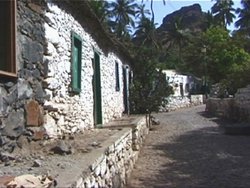 An architect, Álvaro Siza, and his team are called to coordinate the recovery project of the Old Town, on the island of Santiago in Cape Verde. The ultimate goal is this city’s application for a UNESCO World Heritage Site. The Old Town is a historical place: formerly called Ribeira Grande, it was the first city founded by the Portuguese in Cape Verde. This whole process raises high expectations of improving their living conditions in the local population. This film tells the story of the encounter between these two worlds, that of the architect and that of the population, following over three years some of the stories that happened...

TALK WITH THE DIRECTOR WITH HUMBERTO MARTINS

About Catarina Alves Costa I once wrote that she was decisive in the start of a new phase of documentary cinema in Portugal. After a few years, ‘her’ love for the documentary remains the same, in an incessant search for learning with a camera by her side, precisely because reality is inexhaustible for her objects of film desire. In this conversation we will return to her films, talking about the past, the present and the future, anthropology, knowing with the camera, the revealing potential of this medium, and how people and reality can be known in different ways. Of the much that has yet to be done for visual anthropology to gain space for recognition in Portugal, and the paths trodden by the documentary and documentary filmmakers in the last thirty years.

BIOGRAPHY
Humberto Martins is an anthropologist. He is the current director of the Ethnographic magazine, assistant professor at the University of Trás-os-Montes and Alto Douro and researcher of the Center for Research in Anthropology. With a background in visual anthropology, having completed his PhD in Social Anthropology with the use of Visual Media (Manchester, 2005), he has long seen, does, program, participated in festival juries and ethnographic film shows, as well as has written, published and taught in this area. Recently organized and edited together with Catarina Alves Costa the thematic dossier in the magazine Aniki, “Olhar trás: Histórias enredada do cinema e da antropologia” (2022, v. 9 n. 2 (2022): Cinema e antropologia). 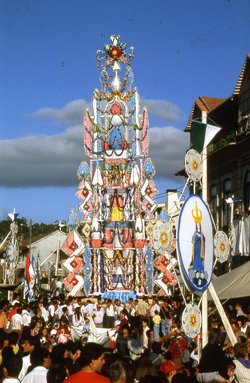 In place of Aparecida, an industrial area in the North of Portugal, the annual festival that takes place on August 15 is being prepared. The andores (portable platforms) are decorated and the coffins in which they will be, according to a secular tradition, lying penitents are already prepared. The new priest, however, wants to end the tradition of promises to do the “burials”. Conflict is inevitable. This is a film that tells the story of the promise payers to Lady Aparecida, her longings and personal histories, reflecting on traditional religiosity and official religiosity, tradition and modernity.