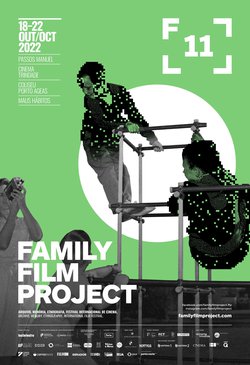 We live in a world governed by the images that come to us through mediation of the screens. We join to the frenetic consumerism of images, the more frenetic the greater the flow of information. In a global world with growing civilizational challenges, where concepts such as war, epidemic or climate crisis seem increasingly closer, it is important that such media images are not neglected as sources of information, but also that they are not devoured uncritically. On the one hand, there is talk of post-truth and the deluge of information; and there is also talk of alienation and escapism in the “society of the spectacle”, to use a term from G. Debord. Against these scenarios, we waved the values of science, but also of art.

Since its first edition more than a decade ago, the Family Film Project has sought to reconcile the political and epistemological weight of the images with their aesthetic value, always pointing its focus a little beyond the direct or immediate dimension of the images, beyond the information that they provide, opening to the performative dimension without harming the archaeological and documentary potential of such images.

Whether through ethnographic cinema, archival or found-footage cinema, “home movies”, the various forms of experimental cinema or the hybridization between cinema and the performing arts, the Family Film Project seeks to highlight the challenges of cinema in its testimonial and artistic double facet: reconciling authenticity with poetry, the real with fiction, the status quo with difference…

In this 11th edition, the festival's program maintains its usual pattern, with several competitive sessions divided into thematic sections: “Lives and Places”, “Memory and Archive” and also a competitive session dedicated to “Fiction and Animation”. In all, the competitive sessions bring together twenty-one films from fifteen different nationalities, including five films of national production.

This year we dedicate the focus to the director and anthropologist Catarina Alves Costa, whose work is unavoidable in the contemporary cinematographic scene, both for the ethnographic richness of her films – often centered on the Portuguese reality – and for the authorial mark and the sharpness of the gaze, which we could summarize here as a kind of anthropological existentialism. This focus on the work of the director born in Porto includes a selection of some of her most emblematic films, as well as a masterclass and a talk with the filmmaker about her work and professional career, conducted by Humberto Martins.

We also present a masterclass by the Spanish director Nuria Giménez on her award-winning film My Mexican Breztel (2019), an exceptional work in the problematization of memory and the appropriation of the archive, which we also screen in a special session (out of competition).

Curated by artist and curator Peter Freund, the festival presents an exhibition of experimental cinema with a selection of more than a dozen short films that extend from the so-called “appropriation cinema” (whose works use other pre-existing or archival materials) to “generative cinema” (whose visual contents are partially forged by computer algorithms). The exhibition of experimental films is preceded by the masterclass Retracted Cinema, where Peter Freund offers us a critical framework of these marginal forms of artistic expression.

In partnership with Coliseu do Porto, the festival's program also includes the concert film Heróis do Mar, an event that aims to pay tribute, through the intersection of cinema, music and theater, to various dimensions of Portuguese popular culture, brought to the stage by the community itself.

Children and young people can also count on the usual workshop that, this year, once again, is led by Tânia Dinis, a filmmaker and artist who has been present in different ways at the festival.

A mention to the usual partners who, throughout the different editions, have supported and reinforced the festival's programming, in particular the Porto City Council, the Institute of Philosophy of the University of Porto, the University School of Media, Arts and Design of the Polytechnic Institute of Porto and the Coliseu Porto Ageas. Thanks also to the NorteShopping, the official sponsor of the awards.
We wish you a good Family Film Project 2022!