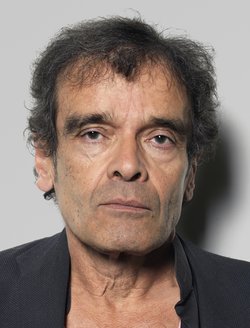 He was one of the most important directors of contemporary documentaries and essay films working in Germany. Since 1966 Farocki has also been collaborating with other filmmakers as scriptwriter, actor and producer. Since 1995 he had numerous exhibitions and installations in galleries and museums worldwide.

His films and installations are generally socio-political in nature and reveal a keen interest in the role of technology in modern society. His films have dealt with such subjects as Vietnam, capitalism, labour systems, surveillance technology and military reconnaissance. Another recurrent theme in Farocki’s work has been the investigation of images and what lies behind them, of what is really visible to the viewer and likewise what remains invisible - essentially the possibilities of seeing. As Thomas Elsaesser has said: “Farocki’s films are a constant dialogue with images, with image making, and with the institutions that produce and circulate these images.” His films and installations are difficult to categorize and demand close viewing. Nothing is as it seems and the viewers are challenged to keep questioning what they see. 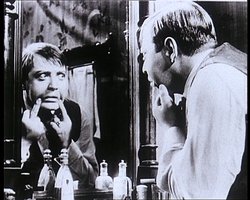 Peter Lorre achieved international fame for his performance in the myth-making role in M. This character has held a peculiar fascination for generations of cinéphiles. However, at the time, whilst such success meant recognition, it also weighed on the Hungarian actor as a constrictive burden.

Using photographs and film extracts, Das doppelte Gesicht reconstructs the ups and downs of Lorre's career, taking into consideration the economic imperatives and workings of the film industry at the time. 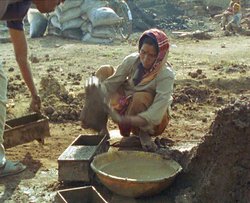 Bricks are the resonating foundations of society. Bricks are simply very long-playing records. Like records, they appear in series, but every brick is slightly different – not just another brick in the wall. Bricks create spaces, organize social relations and store knowledge about social structures. They resonate in a ways that tells us if they are any good. Bricks form the basic sound of our societies, but we haven't yet learned to listen to them.

Farocki's film lets our eyes and ears consider different traditions of brick production in comparison – and not in competition, not as a clash of cultures. Farocki shows us various brick production sites in their colours, movements and sounds.

Farocki shows sites of brick prodution in their colours, movements and sounds. Brick burning, brick carrying, bricklaying, bricks on bricks, no voice-over. 20 inter-titles in 60 minutes tell us something about the temporality of brickmaking processes. The film shows us that certain modes of production require their own duration and that differences between cultures can be shown in brick time. 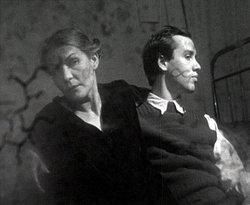 A film about the time of the blast furnances – 1917-1933 – about the development of an industry, about a perfect machinery which had to run itself to the point of its own destruction.

The essay from the Berlin filmmaker, Harun Farocki, on heavy industry and the gas of the blast furnace, convinces through the author's cool abstraction and manic obsession and through the utilization of a single example of the self-destructive character of capitalistic production: "The image of the blust furnace gas is real and metaphoric; an energy blows away uselessly into the air. Guided through a system of pipes, the pressure increases. Hence, a valve is needed. That valve is the production of war material."

Between Two Wars is also a film about the strains of filmmaking and a reflection on craft and creation. Farocki distances himself radically from the thoughtless sloppiness of average television work. The clarity and the precise ordering of his black and white images, which do not illustrate thoughts but are themselves thoughts, are reminiscent of the late Godard. The poverty of this film – its production took six years – is at the same time its strength. 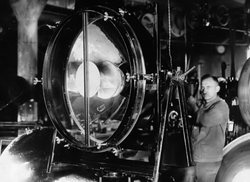 The vanishing point of is the conceptual image of the 'blind spot' of the evaluators of aerial footage of the IG Farben industrial plant taken by the Americans in 1944. Commentaries and notes on the photographs show that it was only decades later that the CIA noticed what the Allies hadn't wanted to see: that the Auschwitz concentration camp is depicted next to the industrial bombing target. (At one point during this later investigation, the image of an experimental wave pool – already visible at the beginning of the film – flashes across the screen, recognizably referring to the biding of the gaze: for one's gaze and thoughts are not free when machines, in league with science and the military, dictate what is to be investigated.

Farocki thereby puts his finger on the essence of media violence, a "terrorist aesthetic" (Paul Virilio) of optic stimulation, which today appears on control panels as well as on television, with its admitted goal of making the observer into either an accomplice or a potential victim, as in times of war.