Rui Reininho has as much of its own as it is not common, whether among the living or among the memories of the dead that have marked us. After the infamous Companhia das Índias (2008), the musician takes a more experimental path with the new album 20.000 Éguas Submarinas. Produced by Paulo Borges, together they conceived a journey that for two years took them through the confines of the seas already navigated, at a pace, trot, gallop, moth and flight, as an escape from deep corals, but not as deep as the exercise of liberation that will soon be revealed.

With the experimental formation as a starting point, Family Film Project challenged Rui Reininho to work the soundtrack of the archival film The Shape of Things to Come by Roberto Niosi + Friends. It is an amateur Sci-Fi / Horror selection featuring films made by Italian American children in New York (1960s). 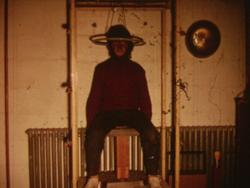 THE SHAPE OF THINGS TO COME

New York suburbs, mid 60s. Rob Niosi and his friends are not even teenagers when they start filming as a game with the home cameras stolen from the family, experimenting hand over fist cinema genres – horror, splatter, science fiction – and animation techniques, tricks, low-angle shots and visual effects. The Shape of Things to Come is an archive selection of amateur films made by the italian archive Home Movies.

It includes excerpts of unfinished films made by this group of young experimenters, recovered almost by chance during a trip to New York, as well as two integral gems: The History of the American Negro, the story of blacks from slavery to Malcolm X, and Empire, an irreverent and rebellious short film toward a symbol of the American power.

Later on, some of the young men become artists: Niosi will work in animated filmmaking, in advertising and in video clip making. Niosi’s obsession for H. G. Wells remained intact since he was a kid and it culminated in a lifelong project: the building of a Time Machine which accurately traces that seen in the 1960 science fiction movie.