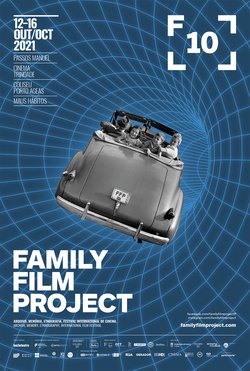 It is tradition to emphasize the rounder numbers, often seen as an opportunity to take stock. In the 10th edition of Family Film Project, we will celebrate the motivations that have shaped this film festival dedicated to the themes of the archive, memory and ethnography. And, naturally, we will take a retrospective look into our journey that brought us here today. The balance is rather positive. Over these last ten years, this festival based in Porto has been confirming the thematic relevance and lines of exploration and investigation, which were always part of its proposal: the tension between public and private, inquiring about the familiar and its archival, the crossing between amateur and professional practice, the aesthetic celebration of “home movie”, the opening to the political dimension of places of intimacy and forms of living from different cultures, the appreciation of the realness conveyed in performance, the alternative and experimental film, the artistic hybridity between cinema and performing arts or other film genres. Year after year, all these venues of cinematographic exploration and reflection about images have been fostering and expanding different valences of the Family Film Project.

This year’s edition program proposes the same structure. The competition sessions hold a selection of films coming from different continents, divided into thematic sessions: “Memory and Archive”, “Lives and Places”, and a competition session devoted to the genre of fiction.

We will be paying tribute to Ruben Östlund, Swede filmmaker best-known for being awarded Palm d’Or in 2017 with The Square. A filmmaker to be (re) discovered this year through a look into his works that defined the beginning of his career – works with a poetic distinctive feature in approaching familiar relations and human adventures, combined sensitive realism with ironic formalism.

For the performance cycle, in addition to the regular Private Collection, we will resume the format of the film-concerts that marked the first editions. We will feature proposals of António Olaio, Flora Détraz and Jorge Gonçalves. The film-concert will be provided by Rui Reininho and his experimental band, through which he gives new life to a science-fantasy film made by New York boys in the 60s. This film-concert also continues the collaboration that the Family Film Project has maintained since its first edition with Home Movies Bologna. A collaboration that in this edition is completed with the conference Women’s Gesture – Life And Work In Italian Home Movies, by Giulia Simi; followed by the projection of the film Memoryscapes - Il Gesto delle Donne, about women and work.

With the masterclass by Carol Nguyen focused on the film No Crying at the Dinner Table and the talk with the Portuguese filmmaker Catarina Vasconcelos about the films Metáfora ou a Tristeza virada do Avesso and A Metamorfose dos Pássaros, the festival completes its program dedicated to understanding how backgrounds and works are relevant in the unfolding of the festival’s thematic.

We also highlight the partnership with MICE – International Ethnographic Film Festival (Galicia) – which this year has an extension in the programming of the Family Film Project, proposing a selection of films related to the thematic panorama, such as special screenings (non-competitive) – presented by Ana Estévez Lavandeira, director of MICE.

For the younger ones, the festival will resume its creative workshops – this year carried out by Tânia Dinis, a well-known filmmaker and artist on the festival.

As part of the celebration of the 10th anniversary, a book/catalogue will also be released: concealing all the events, cycles and performances held since the first edition. With this publication, we celebrate the history of the festival, but we also renew our intention to give visibility to new aesthetic perspectives and new forms of access to the alternative, marginal or historically inaccessible domains of life and its images.

Finally, a special mention to our core partners that support and contribute in many different ways to the production of the festival, in particular the Institute of Philosophy of the University of Porto, Escola Superior de Media, Artes e Design (P. Porto) and Coliseu Porto Ageas.