In this cycle of performances, artists are challenged to explore performativity from archival material - personal or not - or from memory problematizing. The result is a set of performative proposals in its expanded values (interdisciplinary, spatial displacements, thematic displacements). As the intimacies and familiarities are problematized, creative possibilities are projected crossing disciplines and borders, reinforcing, within the event-festival, the fine line between the real and the performative. 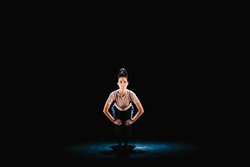 Tutuguri is a solo piece. Here vocal cords and body are playing together, offering to «hear» dance. In a polyphonic solo piece, Tutuguri explores the dissynchronicity between movements and sounds, in a perpetual conflict of opposites. The dancer’s body is inhabited by whispers, animal growls, children’s noises, alien sounds, conversations, spasms, singing from the guts, transporting us to a spectral landscape of voices. Tutuguri aims to connectedness, it proposes fluxes of sounds and affects and promotes bridges to nothingness.

Flora Détraz has a ballet background and follow literature studies. She entered the course at Centre Chorégraphique National Lyon, under Maguy Marin, and then completed the choreographic studies at Pepcc, Forum Dança, in Lisbon.
She had the oportunity to meet artists as Marlene Monteiro Freitas, Vera Mantero, Lia Rodrigues, Meredith Monk, Loïc Touzé, Meg Stuart, Jonathan Burrows, Diane Broman, among others, who influence her own work. She started making her own pieces in 2013,  questionning the relationship between voice and movements: Peuplements (2013), Gesächt (2014), Tutuguri (2016), Muyte Maker (2018). As a performer, she works with the choreographers Marlene Monteiro Freitas, Miguel Pereira, Laurent Cebe and Sara Anjo. 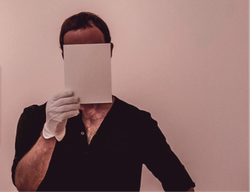 A temporary collective of three performers investigates how corporeal and oral processes are transmitted through the immateriality of dance practices. Based on actions of interpretation, adaptation or contamination of their practices, performers revisit and transform their experiential archives into choreographies, fictions or demonstrations, and summon the public to an injunction space between participation and contemplation.

Jorge Gonçalves, as an independent, works in the performing arts as a curator, choreographer, playwright, producer, performer and teacher. He has a degree in Engineering (FEUP, 2002), has a Contemporary Dance Course at Balleteatro Escola Profissional (2005), attended a Masters in Artistic Performance – Dance (FMH, 2006) and completed the Amsterdam Master of Choreography (AHK, 2014). From 2009 to 2017, he co-founded and directed the performing arts programming structure, MEZZANINE. In 2009 he was the artistic co-responsible and manager of OOPSA Associação and from 2008 to 2011, he co-founded and directed the production structure Obra Madrasta. Since 2006, he has been producing and presenting his artwork in Portugal, Germany, Austria, Spain and the Netherlands. Since 2003, he has worked with several choreographers such as Anna Pehrsson, Daniel Kok, DD Dorvillier, Dinis Machado, Elisabete Finger, Goro Tronsmo, Isabelle Schad, Keith Lim, Litó Walkey, Mathilde Monnier, Né Barros, Rebecka Stillman, Susana Otero and Ula Sickle. He has collaborated with various institutions nationally (Balleteatro, Ballet Contemporâneo do Norte, LaB InDança, Asas de Palco, MARTE, Casa da Música) and internationally (HZT and Tanzfabrik Berlin), teaching regularly, conducting workshops, and mentoring students of performing arts. He has been an associate artist at Balleteatro since 2021.

It’s a performance that encompasses multiple performances, as a set in a concert. Characters that unfold, especially in different places.
A journey started in the 80s, where the desire to dance, even without leaving the same place (performance Il Faut Danser Portugal!, Georges Pompidou Center, 1984) resulted in songs.
Since then, my performance, with a few exceptions, has been diluted mainly in the field of music and concerts. In this new Anyhere Else project, I create songs featuring various musicians, different songs in different collaborations that I present as a performance, joining the voice to the recorded music, and each song a performance situation. Thus, finally, the journey of songs returns, in this project, to the performance: a visual artist at direct speech featuring songs. The scenic space is autonomous by using video, music and the voice that sings more than it speaks, offers itself as a place of contemplation as if the performance cross-dressed as a spectacle as those who present themselves as such.

With the live performance by Susana Chiocca in Where did she go?

António Olaio, Lubango, Angola, 1963. Lives in Coimbra.
Painter and performer. His performances in the early 1980s led him to music.
He was part of Repórter Estrábico between 1986 and 1991, having edited Uno Dos. Since 1996, with the musician João Taborda (António Olaio & João Taborda), edited the CDs Loud Cloud, Sit on my Soul, Blaupunkt Blues. Simultaneously, he began a solo journey with the collaboration of musicians such as Richard Strange, Victor Torpedo, Vitor Rua, Frederico Nunes, Anselmo Canha, Paulo Furtado, José Valente, Érika Machado, Silvestre Correia, Susana Chiocca, Luís Figueiredo, Ana Deus, Haarvöl, Pedro Tudela and Miguel Carvalhais, having edited Anywhere Else. His songs are frequently featured in his videos and exhibitions. Professor in the Architecture course at the University of Coimbra. He completed his PhD in 2000, published in his book Ser um indivíduo chez Marcel Duchamp. Director of Colégio das Artes and researcher at the Center for Social Studies of the University of Coimbra.