Design and coordination of video installations by Gabriela Vaz Pinheiro

Three films selected for their particular visual and sound plasticity, which irresistibly invited to a reinterpretation of their mode of exhibition. The result is a set of video-installations where one proposes a coexistence between the films and the scenographic media that support them. 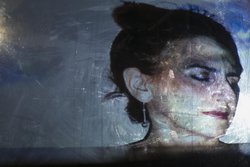 Scheherazade or (Per)forming the Archive

Scheherazade is an autobiographical and performative meditation on being an artist, and on the intergenerational transmission of cultural history in the construction of identity. Affirming the presence of the body of the ‘Other,’ my son’s heartbeats in utero join my mother’s last breaths. Shortly before I left El Salvador, I was asked to dance Scheherazade by the artist Julio Sequeira. At the time, I had no idea of Scheherazade’s bravery or incredible imagination. I could only focus on the sensual and erotic undertones that Rimsky Korsakov’s music conjured with its languid violin and tantalizing bells. I felt suffocated by the orientalist gaze. And I could not do the dance.

In 2006, a few years after my father’s passing, I was reminded of my teenage Scheherazade and decided to play Scheherazade on my own terms. Like the mythic Scheherazade, telling stories would ensure my survival, set me free. But the video felt unfinished. This year, three years after my mother’s death, I am (per)forming it again, reflecting on the translations, the contradictions, the passage of time. 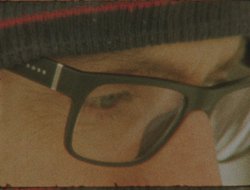 The Melody of Decomposition

The Melody of Decomposition is a super 8mm non-narrative film composed of footage I gathered over the course of 8 months between 2017 and 2018. The different locations include a reservoir for which I have a particular lineal affection, a cemetery in the Bronx where my ancestors are buried, and a slaughterhouse in upstate NewYork. Consequently, the film explores themes of family, death and the loss of innocence. In doing so it creates a concentrated rhythm and familiar cyclical pattern of movement; both of which result in a subconscious pursuit of the inevitable.

Alex Faoro is a filmmaker and educator based in Brooklyn, NewYork. His artistic practice is influenced primarily by documentary and avant-garde traditions; however, his films often incorporate a spectrum of modalities. His current super 8mm work explores concepts of nostalgia, absurdism and mortality. It also addresses (both thematically and materialistically) the ephemerality of images and memory.

On Exile, fragments in search of meaning

On Exile, fragments in search of a meaning is an experimental film that looks at the phenomenon of depression as a process of radical otherness, estrangement and exile from oneself, eliciting empathetic relations from the viewer. As an anthropology of mental illness, this project is concerned with human vulnerability, and the multiple identities that inhabit and haunt us. Ten people willingly share their own stories and feelings on depression, their darkest moments and the ways they cope with it. Through a documentary approach, psychological portraits are created, reinforced by a second performative moment where each interviewee enters a cathartic journey, by listening to a song they previously chose. Although isolated, the participants compose a polyphony of suffering and ultimate hope. It is in a metaphorical state of exile from the land of normalcy and happiness (as social and personal constructs), that the depressed individual perceives himself – and it is to that idealized place that he ultimately desires to return. The work’s referent is the unimaginable pain that constitutes severe depression, a dimension that resists definition. Excluded from the visible world, there is substantial misunderstanding and stigma around the disease. Moreover, there seems to be a deficit in its representation. On Exile… is inevitably an imperfect attempt to capture such experience, and an opportunity for exercising empathy. What is at stake in working with these individuals is the opening up of a space where mental illness is not expelled from visual and discursive practices, or hidden in political correctness.