LANDSCAPES OF THE SELF: PERFORMANCES

The cycle of performances "Landscapes of the self" is intended to start a new stage of the festival where several artists are challenged to present proposals within the thematic areas that characterize the Family Film Project. Both the performative and documentary valences are implied in the composition and construction of a self, allowing to create diverse biographical approaches. The Bio-graphy shows itself as a moving landscape, a poetic act, an image that gives itself to the other, while allowing itself to emerge in the imperfect territory of the self. For this edition, Cristina Mateus, Isabel Barros, Joclécio Azevedo, Marianne Baillot, Rebecca Moradalizadeh and Susana Chiocca cross sounds, texts, images and objects with body and voice, allowing us to experience and fiction their concerts, their poems to the life, their anti-biographies, their reports, their flavors or their metamorphoses.

LandMarks #3 – a question of identity

In Persian literature, the circle is a symbol of destiny. " Landmarks # 3 - a question of identity " is a recipe that combines the poetic side and the bureaucratic side on the intense process of searching and reformulating an identity; about a (distant) genetic origin; and about its time. A time-consuming, arduous, inspiring and creative process. It is an approach to the territorial and geographical division created at birth that now gains another form of union. It is a passage. The discovery of food is an approach to this distant land. I cook an olfactory souvenir from family memories. In "Landmarks # 3 - a question of identity", the female body manipulates objects and materials dispersed in space allusive to these memories. A body with a voice. With strength. With presence. With mark. While the official mark does not conclude, I recreate a culture, I recreate a history.

Plastic artist of portuguese-Iranian origin, lives and works in Porto. In 2015 she began her Master's Degree in Artistic Studies - Museology and Curatorial Studies by FBAUP - Faculty of Fine Arts of the University of Porto and in 2016 she began the internship (integrated in the 2nd year of the master's degree) at the Serralves Museum of Contemporary Art at the Performative Arts Service. Licensed in (2011) in Plastic Arts - branch of multimedia, by the same institution; In 2011 she attended the Erasmus program at Sheffield Hallam University in Sheffield, UK. In 2012 she attended a course by Maumaus - Independent School of Visual Arts at the Curatorial Lab residence part of the European Capital of Culture 2012 in Guimarães. Since 2010 she has developed an artistic career in the plastic arts, presenting her work in individual and collective exhibitions / presentations in Portugal, Sheffield and Berlin. She participated in several artistic residencies, workshops and courses where she collaborated with several artists. The areas she explores are the performance, videoart, photography, soundart and design on the form of installation, having as main focus the use of the physical and psychological body of the Human Being and its repercussions in the social and political context. 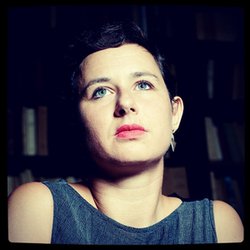 Passing Through, Reverse Though

In this performance, I revisit Gutai Passing Through by Saburo Murakami. Murakami pierced frames in Japan in 1956; Steve Paxton and Yvonne Rainer walked and manipulated a large white balloon in the 60's to talk about their daily lives. Non-dramatic and non-psychological bodies meant to affirm nothing more than the equality of all parties, equality between bodies and objects, equality between bodies and the background. I liked these minimalist attempts to erase any psychological, erotic, and power relationship with the world so much. I liked Jean Prouvé's architecture so much with the concept of building houses like cars through prefabricated modules. To me, these modules were like the members of the body of the postmodern performer. But this supposedly neutral and democratic body had actually gone through hours and hours of work before deconstruction. It was a carved body. Moreover, it was necessary to recognize, after all, the body had erogenous zones, black holes and some moments were more important than others in life. Expressionism reappeared over everything when it was intended to have been surpassed.

Lives and works between Porto and Tours. After obtaining her Master's degree in Political Science (MA) she graduated in contemporary dance in Austria (SEAD; Anton Bruckner Univ.) and in France (CNDC-Angers; Transforme-Fondation Royaumont). From her career as a performer, we highlight the collaborations with António Pedro Lopes, Rita Natalio, Charlotte Plasse, Anne Juren and Séverine Rième. Since 2008, she has staged her own pieces in a deconstructive and burlesque style, where body-figures or fused in the landscape must perform impossible tasks: dive into sensation without losing sight; escape from the abuses of memory and anticipation; reveal multiple dimensions at the same time. Her dance has to convey the idea that dance art is a powerful practice for understanding the human psyche and exploring relationships between humans and systems (technological, representational, linguistic, and social). She is an artist supported by the Region Center-Val de Loire and associated artist of Maus Hábitos, Porto. 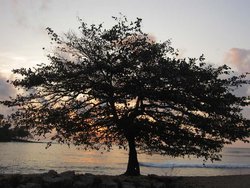 Half of me is sea and the other half are words lodged in silence. Inhabited by a sort of time landscape, of a time suspended, I try to realize this landscape of myself. I am alive and I write sun, by Antonio Ramos Rosa, is one of the phrases that I encounter so many times. Big words, whole and always delicate. I choose them to name the performance on a possible landscape of a self.

Choreographer, theatre director, artistic director. She took her first ballet class at age 8. After her initial training in classical dance with Ruth Howner, she took several courses in contemporary dance and composition in Paris, where she resided and studied at the Institut d'Études Théâtrales-Paris III. In Berlin she did an internship with Susanne Linke in which she developed solo performance, having after that experience created several solos, and still being a format to which she occasionally returns. She studied theater and completed the licentiate of the Superior Course of Theater at the Escola Superior Artística do Porto. Since 1992 she has regularly presented her creations. Her shows were collaborated by several artists such as Pedro Tudela, Albuquerque Mendes, Carlos Guedes, Jonathan Saldanha, Regina Guimarães, Daniel Worm d'Assumpção, Nuno Meira, Nuno Gama, João Paulo Seara Cardoso, Roberto Neulichedl, André Cepeda, João Vaz de Carvalho, Vítor Rua, among others. She collaborated in several shows at Teatro de Marionetas do Porto, staged by João Paulo Seara Cardoso. As programmer, she conceived various dance cycles in the areas of dance, theater and music, giving priority to transversal and alternative formats and dedicating moments to emerging creators. She was awarded the Almada prize (1999), attributed to the balleteatro, as a distinction of the work carried out at the programming level. In 2015 she also received the Gold Cultural Merit Medal in the name of the balleteatro. She was member of the international network and member of the artistic council Repérages Danse à Lille, from 1999 until the end of this network, 2011. She is responsible for the coordination of several social projects, having worked in recent years with several communities. In 2008 she released her first book, Quando é que chegamos? especially aimed at children. She is an author, writing a monthly opinion piece for Porto 24. Since November 2010 she has been artistic director of Teatro de Marionetas do Porto and Museu das Marionetas do Porto, which opened in February 2013. 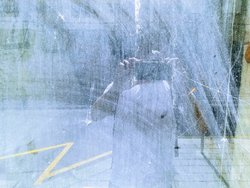 In 1874 the guide "The Universal Commercial Electric Telegraphic Code" was published in the United Kingdom, a practical codification manual for telegraphic messages of commercial content organized by W. Clauson-Thue. With a vocabulary enumerated and divided into keywords and short phrases, the guide served as compilation of an ingenious system for encoding messages protected by a common decoding key. In this performance I recover some of the reference phrases of this volume, extracted from its context and its original function. Transformed into performative material in this compact version, these words and phrases merge into a continuous, labyrinthine text, consolidating itself around a strangely vague and familiar language. The misrepresentation of the original text serves as an excuse for an interpretative opening, invading other poetic territories and subverting the organization of discourse.

Lives in Porto since 1990. His work is in different artistic disciplines, having dedicated himself more intensely to choreographic creation since 1999. He has participated regularly in creative and research projects, developing collaborations and integrating residences in diverse contexts, both inside and outside the country. In addition to his work as a performer, he has developed training activities related to choreography, dramaturgy and, more recently, to the sound effects. He was artistic director of the Núcleo de Experimentação Coreográfica in Porto between 2006 and 2011. He is currently a member of the GDA plenary board and the GDA Foundation Board of Trustees. Since 2012, he has been part of the project "Resident Artist" of Circular Cultural Association in Vila do Conde. From 2016 he collaborates as a guest assistant in the Course of Specialization in Performance at FBAUP. 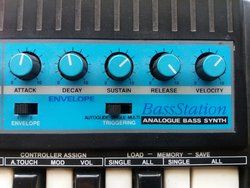 I'M YOUR SLAVE, I'M YOUR MASTER

Lives and works in Porto. In recent years she has presented the solo exhibitions J. e as Pedras (Espaço Mira, Porto), ИOIT (Fernando Santos Gallery, Porto) and Répétition (Plastic Arts Circle of Coimbra) and participated in collective exhibitions Lugares de viagem – Bienal da Maia 2015, Homeless Monalisa (College of Arts, Coimbra), Diálogo (Fernando Santos Gallery, Porto), Uma (Painel - gallery of FBAUP, Porto), P.- uma homenagem a Paulo Cunha e Silva, por extenso. Also in 2015 she made the scenery for Lastro by the choreographer Né Barros and participated as an interpreter in the film A Santa Joana dos Matadouros by João Sousa Cardoso (2016). In 2016 she presented the performance ...de qualquer modo há um ritmo forte...e tu sabes o que é. Não dá para parar (Maus Hábitos, Porto). Conception of the videoclip for the track Sleep of the album Three-Body Problem, @c, by Pedro Tudela and Miguel Carvalhais, released at the Passos Manuel cinema, Porto. Community Artistic Residence in the municipality of Mogadouro, Trás-os-Montes, at the invitation of João Pinharanda and the EDP Foundation, which started in April 2016 and will conclude in September 2017. This year she presents the performance Password in Project E Agora ...? By Susana Chiocca on Night of performances, Maus Hábitos, Porto. Participation in the collective exhibition Them or Us, Um projecto de ficção científica, social e política, curated by Paulo Mendes in the Municipal Gallery of Porto. Concert / Performance BOMBE À RETARDEMENT (BEFORE) by the Twin Girls And Wild Boys, band of which she is part, on the opening night of this exhibition. 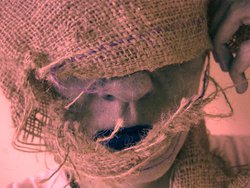 BITCHO is an ambiguous figure that is transmuted into the various presentations. Maintaining an organic relationship with what surrounds it, it questions itself about the world, the moment, the sexuality, the origins... It is a project started in 2012 developed from a sound, visual and textual structure.

PhD in Contemporary Art by the Faculty of Fine Arts of Cuenca in 2016. Graduated in Sculpture by the Faculty of Fine Arts of the University of Porto in 1999. Organized some exhibitions and performative events, highlighting the programming of the space Sala between 2006-2010, in partnership with António Lago. She has participated in several exhibitions, events and workshops since 1999. As an artist, she works intuitively the moment and the political-social momentum, relating the various events in an approach to the other. She has developed work in various fields such as drawing, installation, video, sound, photography and performance. Since 2005 she has been researching text and spoken word projects such as Balla Prop, co-authored with Ana Ulisses, or BICTHO where performance, plasticity, music and video are combined.