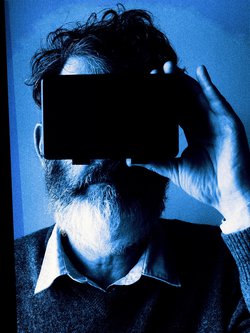 Daniel Blaufuks has been working on the relation between photography and literature, through works like My Tangier with the writer Paul Bowles. More recently, Collected Short Stories displays several photographic diptychs in a kind of “snapshot prose,” a speech based on visual fragments that give indication of private stories on their way to become public. The relation between public and private has been one of the constant interrogations in his work. He works mainly with photography and video, presenting his work through books, installations and films. His documentary Under Strange Skies was shown at the Lincoln Center in New York. Recent exhibitions include: Calouste Gulbenkian Foundation (Lisbon), Palazzo delle Papesse (Siena), LisboaPhoto, Centro Cultural de Belém (Lisbon), Elga Wimmer Gallery (New York), Museu do Chiado (Lisboa), Photoespaña (Madrid), where his book Under Strange Skies received the award for Best Photography Book of the Year in the International Category in 2007, the year he received the BES Photo Award as well. He published Terezín at Steidl, Götingen in 2010 and in 2011 he had a solo show at the Museum of Modern Art in Rio de Janeiro and in 2014 at the National Museum of Contemporary Art in Lisbon. In 2017 he was awarded the AICA-MC Award for the exhibitions Léxico and Attempting Exhaustion in the previous year. He has a PhD from the University of Wales. For more information see www.danielblaufuks.com 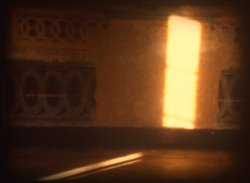 A film shot at the Palácio do Marquês de Pombal in Lisbon, which today houses the Carpe Diem exhibition space created by curator Paulo Reis. The work, filmed in super 8 film, interweaves the current sounds of the palace, the steps of the visitors, the staff, birds, airplanes, etc., with piano compositions by Luís de Freitas Branco who lived and died here. In their original presentation in the Carpe Diem's own space, the recorded tracks were combined, yet, with the noises in progress at that moment, creating a certain auditory confusion between the recorded and the real, between the past and the present. 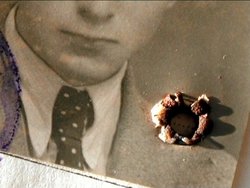 During World War II, Lisbon was a passageway for refugees from the territories occupied by Hitler to America. This film tells of two parallel stories about exile and integration. Through a narrated memoir and photographs, the saga of a German Jewish family who decided to stay in Portugal is told. The larger and more sociological story about the others who used Lisbon as an escape route is also reported through period films and the written memoirs of some of the most important intellectuals of the day, including Heinrich Mann and Alfred Döblin. This film evokes a desperate and intensely romantic time, of exile, lack of hope and, ultimately, of freedom.

Introduction to the work of Daniel Blaufuks by Paula Rabinowitz. Talk with the artist. 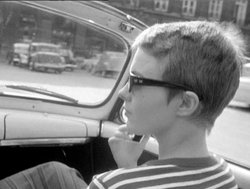 Inspired by La Disparition de Georges Perec, a novel written without using the letter E, this work consists of a reassembly of the classic Breathless by Jean-Luc Godard, in which all the shots with the main character, the role of Jean-Paul Belmondo, have disappeared. What remains in this absence is our cinematic memory, which, instinctively, attempts to fill this void, around which everything seems to revolve. 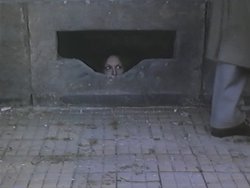 As If is a video film that, although part of my exhibition All the Memory of the World, Part One, is a work by itself and is best viewed in a large exhibition room, because of the small details in the image and its extended length of more than four and half hours (in the original version). It is a film on the Czech city of Terezín (Theresienstadt), that follows the book and DVD I published years ago (Terezin, Steidl). The work was conceived from the start for the large projection screen and was edited from different sources, so constructing a specific narrative and chronological structure which intercalates these alternate layers. These are made of truth and fiction, of so-called document and of historical fake, of romanticised drama and of newsreels. The spine of the work and from which the main narrative takes its cue, consists of the images that I recorded during late May and early June 2014 in the city itself, again called Terezín, now long after its brief period during the war as Theresienstadt. These images are also the larger part of As If, and consist mostly of wide-angled street views, house facades and closed building doors. They also include views of sun bathing girls, bored teenagers, playing children, elderly passing by, fast noisy cars roaring down, beer-buying men, etc., in fact, everything that makes up the life of a normal city and is somewhat reflected by the images from the second largest source, or layer, the fake documentary Theresienstadt made by the Germans in 1944, which pretended to show exactly this: how normal the city-ghetto-concentration camp was. There we can equally see elderly passing by, children playing, youths playing sports and chess-playing men. Some of the images dialogue directly with their previous counterparts, as they were purposely filmed in the same locations.