THE FESTIVAL OF (IN)APPROPRIATION #10

THE FESTIVAL OF (IN)APPROPRIATION #10

Collage or compilation. Found footage film or recycled cinema. Remix or détournement. Whatever one might call it, the practice of incorporating preexistent media into new artworks engenders novel juxtapositions, new ideas, and latent connotations… often entirely unrelated to the intentions of the original makers. In that regard, such works are truly “inappropriate.” Indeed, the act of (in)appropriation can reveal unimagined relationships between past and present, here and there, intention and subversion, artist and critic, and perhaps even compel us to reexamine what it means to be the "producer" or "consumer" of visual culture itself.

Founded in 2009 and curated by Jaimie Baron, Greg Cohen, and Lauren Berliner, the Festival of (In)appropriation is a yearly showcase of contemporary, short-form, audiovisual works that appropriate existing film, video, or other media and redeploy them in “inappropriate” and inventive ways. This year marks the culmination of the Festival’s first decade, with a program that ranges from militant political documentary, uncanny TV supercuts, and raucous re-mix juggernauts, to quasi-DIY orphan film animations, haunting YouTube mash-ups oozing with existential teen angst, and a brooding digital experiment performed upon a single, black-and-white, still photograph. 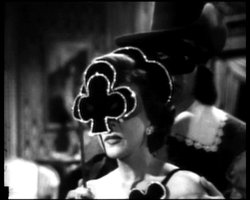 A private conversation between a couple at a costume ball gets increasingly bizarre as the two characters reveal their true faces to each other, again and again. Delving into the archive to forage for found footage, Ribera deploys the tools of digital manipulation to warp the time and space of film history. Identity Parade, in turn, asks us to imagine the many masks we wear and how they shape our most intimate interactions. (Lauren Berliner/Greg Cohen)

NOTHING A LITTLE SOAP AND WATER CAN’T FIX

In films, as in life, the bathtub is often considered a private space for women – a place not only to groom, but to relax, to think, to grieve, to be alone, to find sanctuary. For Hollywood, though, it’s also a place of naked vulnerability, where women narratively placed in harm’s way have no escape. Using appropriated movies, this experimental found footage work deconstructs the representations of women in this domestic space as historically framed in popular film. (Jennifer Proctor)

“Acting erratically” is a term typically used by law enforcement when they believe they are encountering someone experiencing mental distress. This short film explores the connections between freedom of movement and state sanctioned violence in the lives of NYC-based women and gender-non-conforming people of color by critically engaging with the archive and using found footage as metaphorical architecture. A narrative of resistance is explored through the first person by Mecca, who re-appropriates the idea of Acting Erratically as a powerful and performative response to systemic oppression and police violence. This film was made collaboratively with members of Picture The Homeless and Black Youth Project 100 (NYC Chapter). (Tuff Guts, et. al.)

In Normal Appearances, Penny Lane’s nearly-silent recut of the reality TV show The Bachelor, we see a series of different women perform the same gestures in succession, thereby exposing not only the scripted nature of all of the movements in the show, but also the ways in which femininity itself, as narrowly defined by popular culture, is a set of performed elements that – once isolated and repeated – reveal its arbitrary nature. Even when the emotion appears to be real, the way in which the women brush away their tears indicates their learned compulsion to perform their gender according to the unspoken rules of contemporary “romance.” (Jaimie Baron) 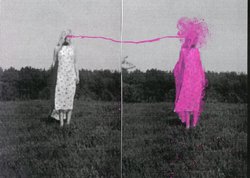 In the unearthly world of E, hand-made meets hi-tech as characters appear to consume one another with their own, trafficked likenesses. Constructing her work entirely from laser-printed film stills (approximately 770 in total) lifted from Niklaus Schilling’s 1972 horror film, Nachtschatten, Zemlianski rips, layers, and paints these images with pastels and charcoal, then scans them back together into a bracing animation set to the eponymous song (E) by the Berlin-based band, Comb. (Lauren Berliner/Greg Cohen)

Repetition gives rise to hilarity as a dramatic male voiceover pronounces the word “dead, the phrase “where he dies,” or variations thereof over and over again in Aaron Valdez’s Only the Dead. Yet, the silliness of the supercut form is countered by the awareness that we are looking – however briefly and obliquely – at images of actual dead bodies aired previously on the reality show The First 48. The televisual iconography of real human death – a motionless hand or foot, a spatter of blood, a slumped body only partially visible behind a door – is articulated as an impoverished vocabulary for representing genuine trauma. In this film, each cut is literally correlated with the extinguishment of a human life. (Jaimie Baron) 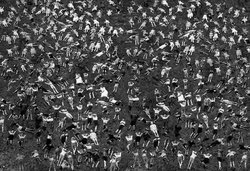 DERIVATION OF THE MEAN LIFETIME

A single black and white photograph of scores of children sprawled in a field of grass, shot from overhead and at an appreciable distance. Slowly, subtly, a series of “meditative gestures” (as the artist refers to them) begin to “animate” the stillness of the original image. Something has gone awry. Time and loss pervade the stillness, though nothing appears to have changed… or has it?.. The result is a deeply evocative, disquieting investigation of attention, memory, disappearance, and human folly, made all the more poignant (if no less mysterious) by the revelation of the photo’s title and date at the end of the work. (Greg Cohen) 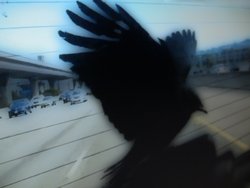 On the most basic of levels, Drive with Persephone recasts the ancient myth of Persephone’s abduction in the language of YouTube “drive-with-me” vlogs. On closer inspection, the work is so much more, perhaps above all in its compassionate register of the perils and exultations of adolescence, and the wisdom and cruelty of old age. A timely, potent rumination on the enduring, immutable cycle of life and death, Mille Feuille’s video confronts—with a mixture of stoicism and defiant hope—the unmooring of social life in our apparently hyper-connected world. (Greg Cohen) 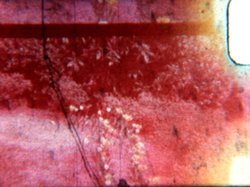 At the outset of Brice Bowman’s Sand, the frame of the rephotographed home movies that furnish the raw material for his film appears shunted slightly towards the lower right quadrant of the screen. It is a harbinger of the spectral, mesmerizing experiment to ensue, alerting us to the uncanny sense of loss that comes with the recovery of private documents. Here, the medium of film is adapted to the format of the family album… in this case one that is scavenged from an estate sale, a flea market, a rummage store somewhere. To the vaguest sounds of beach-goers and ocean waves, we scroll and scan, sift and sort—turning slowly here, flipping more quickly there—through a humble catalogue of past lives and forgotten places, in all their affecting, comforting anonymity and triviality. (Greg Cohen)

A sample-based video for now, about the time before now. Part experimental film, part music video and concept album, The Was is the collaborative meeting of Australian sample artists Soda_Jerk and The Avalanches. Constructed from over a hundred rotoscoped film samples, The Was is a de/tour de force through the neighborhoods of collective memory. (Soda_Jerk)