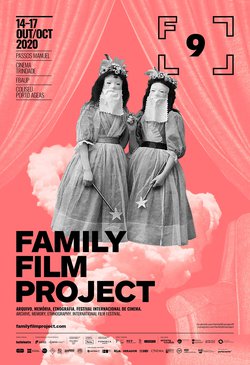 In its 9th edition and in the midst of a pandemic year with repercussions at multiple levels, the Family Film Project Festival reinforces its mission presenting us a world confined in the stronghold of family spaces. A world increasingly ruled by distance, yet closer to images.

This year, the competition program’s line-up will have films directly related to the pandemic condition and the social and behavioral changes that result from it. Regardless, we are also interested in pursuing the project of sharing works that take off from the present to question the construction (and deconstruction) of memory and archive - thematic areas that this year will be especially present - as well as the forms of representation of work, of affections and places.

Following this framework, this 2020 edition will focus on the filmmaker Harun Farocki (1944-2014). He started his artistic trajectory in the field of activist cinema and later in the 90s he also turned to video installations. Farocki is sometimes considered an artist-archaeologist for the way he explores the modes of social and political representation and for his attention to the historical materiality of the images themselves. On the last day of the Festival, on October 17, will be shown a selection of four feature films from different moments of his career, between 1978 and 2009: Between Two Wars [ZwischenzweiKriegen] (1978), Peter Lorre: The Double Face [Peter Lorre: Das doppeltegesicht] (1984), Images of the World and the Inscription of War [Bilder der Welt und Inschrift des Krieges] (1988) and In Comparison [Zumvergleich] (2009). These sessions will be preceded by a masterclass by Susana Nascimento Duarte, dedicated to Farocki's work.

On the first day of the Festival, the Private Collection performance cycle will also be presented, this year with interventions by Tânia Dinis and Flávio Rodrigues (in the Museum of the Faculty of Fine Arts of Porto) and with a concert by Alexandre Soares (in Passos Manuel). As always, this cycle takes up the central theme of the Festival – the archive and memory – to propose free approaches to the creative and intimate space of each artist.

Dedicated also to the younger ones, the festival will also resume its workshop Images from Back Home, where children can carry out creative activities revolving around the theme of the festival through images and performing arts.

As in previous years, a new book focusing on cinema, new digital media and the reflection on images will also be launched: Memory and Aesthetic Experience - Essays on Cinema, Media and Cognition, edited by Filipe Martins in partnership with the Philosophy Institute of the University of Porto, will feature original texts by Jaimie Baron, Patricia R. Zimmermann, Dale Hudson, Filipe Martins, Luís Umbelino, Nelson Araújo, Susana Nascimento Duarte and Wolfgang Ernst.

Created in 2012, the Family Film Project organizes its competitive film sessions according to three strands: Lives and Places (with a focus on voyeuristic, biographical or documentary recording of habitats and daily life), Connections (focused on interpersonal and community dynamics) and Memory and Archive (dedicated to creative looks sourced on testimonies and found footage). In addition to the competition screenings, the Festival program traditionally reserves a prominent space for directors, artists and guest researchers of national and international renown, such as Jonas Mekas (2012), PéterForgács (2013), Alina Marazzi (2015), João Canijo (2016), Regina Guimarães (2017), Bill Nichols (2018), Daniel Blaufuks (2018), Paula Rabinowitz (2018), Cláudia Varejão (2019), Jaimie Baron (2019) and, this year, a section dedicated to Harun Farocki.

Between this 9th edition and the preparation of the 10th, a special program dedicated to Roy Andersson will be presented in partnership with the Retrospective that Alambique and the Cinemateca Portuguesa in Lisbon will hold. It will be a moment of great prominence for the singularity of the work of this Swedish director.