Views that celebrate the unity between the individual and the place, views that summon any fears of the present, dreamy views, views that include the absence, or who fear the emptyness, views made of landscapes, people, sounds, lights and smells. An opening through the wall to let in the light and time. 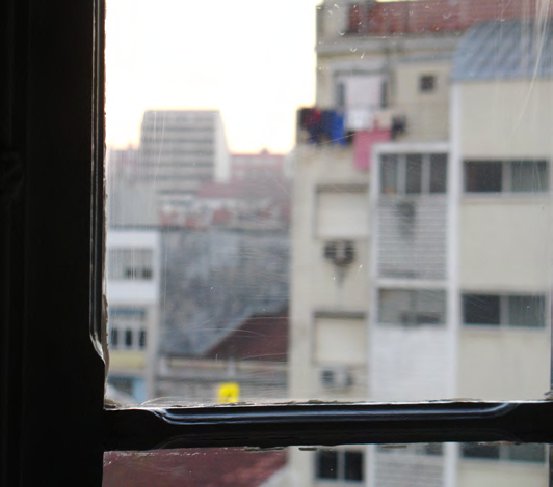 "Not only is the amount of light that provides a window ...
It is not simply the amount of noise that it prevents,
when it closes when it opens .. Not just that, right?"
(Manuel Tainha)

Born in Bari, working since 1991 in Lisbon. She studies Portuguese and French literature at the University of Bari, obtaining a master's degree with the thesis "The Portuguese Colonial Cinema, from the Mute Cinema to the Cinegraphic Mission". She obtains a scholarship in Portugal in 1983, 1986 and 1991, studying Portuguese and African Literature at the Faculty of Languages, University of Lisbon. She completes her training with courses in Aesthetics, Art Studies and Film at the New University of Lisbon. Independent curator, in the 90 she collaborates with the Portuguese Cinematheque, Rivoli Theatre, Culturgest institutions in Italy, France and Brazil. Between 1992 and 1995 she is co-director at Real/João Fiadeiro. Visual artist and documentary filmmaker, she uses different media and focuses her research on interculturalism and the relationship of cinema with other arts. In 1998 she directed her first documentary film. Between 1999 and 2001 she is responsible for the creation, production and circulation of the traveling exhibition to the 18 district capitals "Encounters - stories of the gipsies among us." She has been teaching regularly on the image relation with the other arts (IADE, ETIC, Dance Forum, CEM, Cascais Cultural Centre, NEC, Calouste Gulbenkian Foundation). She is the author of texts and coordinator of several publications on cinema. She worked on photographic, graphic and editorial projects with the Alkantara Festival and Teatro Maria Matos (2001/13). Since 2003, with the Film Portraits (filmic installations), she has presented her work in Portugal, France, Italy, England, Sweden, Norway, Mexico, Uruguay, Brazil, Canada, the United States. She highlights the participation at the Biennale in Lulea, Sweden, in 2006, and the Venice Biennale, Italy Pavilion in the world 2011; the exhibitions at CAM Gulbenkian and Serralves Foundation in 2002; CCB 2003 and 2012; Chiado Museum and La Villette Paris 2004; Cinematic Art Gallery Solar 2006; Espaço do Tempo 2006; Stenersen Museum Oslo 2009; Gallery Diário de Notícias 2010; Matadero Madrid 2012. In 2014 she participates in the exhibitions "Inhabiting the Collection" Medeiros e Almeida Foundation Lisbon, "Etre Ici" Villa Mimi Calpe Tangier. With the documentary "In Medias Res" she wins the Prize for Best National Film of the Architectures Film Festival and Special Mention of the Temps d'Images Films on Art.